At the beginning of the 19th century, attempts were made to create a lead battery, and in 1886, Henri Tudor patented a lead battery that is still used in cars today.

The lead acid battery in the charged state has a positive electrode with a lead core, a shell of lead (IV) oxide (PbO2), and a negative electrode of finely divided porous lead (lead sponge). The electrolyte is a dilute (27%) sulfuric acid (H2SO4). In the discharged state, both poles are made of lead (II) sulfate (PbSO4). The nominal voltage of a cell is 2 volts, so that for a 12-volt lead acid battery there are 6 cells in series. During discharge, the chemical reactions are at the negative pole

at the positive pole

Electrons are produced at the negative pole and taken up at the positive terminal. when loading, all of the processes run in the reverse direction.

The capacity of electric energy storage is measured in amp hours (Ah). The stored energy in watt hours (Wh) is obtained by multiplying the capacity with the nominal voltage Vn. The maximum achievable performance for a short period, Wmax, is the product of maximum current, Amax, and voltage Vn.

For comparing devices in practice, the values in Wh or Wmax are divided by the volume or weight of the storage unit. Lead acid batteries have an energy density of 30 Wh/kg. 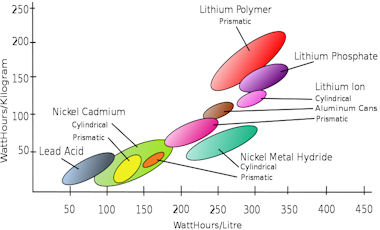 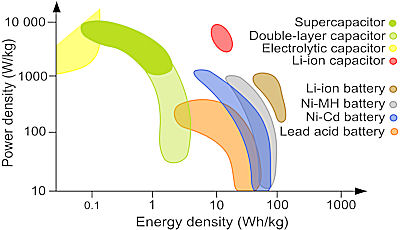 In both figures the lead battery the nickel-cadmium-battery (Ni-Cd battery) falls after the lead battery. The Ni-Cs battery was introduced at the start of the 20 century, it was more and more banned from the market after the end of the century because of environmental impact of toxic metal cadmium at disposal.

The nickel-metal hydride battery (NiMH) was developed in the second half of the last century. In 2005, low self-discharge NiMH batteries were introduced and have increasingly enjoyed a high market share. The negative elecrode is an alloy of metals (M), including lanthanum, cerium, neodymium, praseodymium, nickel, cobalt, manganese, aluminum or others. All these compounds reversibly form a mixture of metal hydride compounds by incorporation (charge) or release (discharge) of hydrogen. During discharge, the chemical reactions are at the negative pole

at the positive pole

The lithium-ion battery, first launched on the market in 1991 by Sony, reaches energy densities of more than 100 Wh/kg. It has a cathode (negative terminal) of graphite and an anode (positive terminal) of lithium metal oxide,
e. g. LiMn2O4. The electrolyte is the salt lithium hexafluorophosphate (LiPF6) in anhydrous solvents such as ethylene carbonate or, for the lithium-polymer battery, in a solid gel-like polymer film. During loading, the positively charged lithium ions migrate through the electrolyte from the anode to the graphite layers (nC) of the cathode. The charge current is generated by the electrons through the external circuit. The lithium ions form an intercalation compound (LixnC) with the carbon of the graphite. When discharging, the lithium ions migrate back into the metal oxide, and the electrons flow through the external circuit to the cathode. The chemical reaction at the negative terminal for unloading is

at the positive terminal

In 2017, the world largest lithium-ion battery power station with a power of 100 MW and a capacity of 129 MWh was build in Hornsdale, Australia. Tesla offers for PV home use the Powerwall lithium-ion battery. The capacity is 13.5 kWh, the volumen 135 L and the weight 120 kg.

The lithium polymer battery belongs to the lithium-ion batteries with a cathode of graphite and an anode of lithium metal oxide, but uses a polymer electrolyte instead of a liquid one. The semisolid dry, gelled or porous polymer has a high conductivity. The polymer battery provides a higher specific energy than other lithium-battery types.

The sodium-sulfur battery was developed in the second half of the last century mainly for stationary storage applications. The molten-salt battery is constructed from liquid sodium and sulfur. The operating temperatures of 300 to 350 °C require thermic isolation and heat to start. The chemical reaction for unloading is 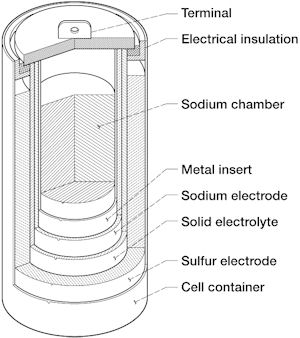 The cell (figure on the left) consists of steel casing as the positive electrode that is protected inside by chromium and molybdenum from corrosion by the molten elemental sodium. A cylindrical shaped beta-alumina ceramic electrolyte separates the sodium from the container of molten sulfur, which is made from an inert metal serving as the cathode. Storage density is 200 Wh/kg. Sodium-sulfur modules of NGK Insulators, Hitachi, have a power of 50 kW and a capacity of 400 kWh. The Tokyo Electric Power Company combined the modules to battery systems of 6 MW power and 48 MWh capacity with a life time of about 15 years. 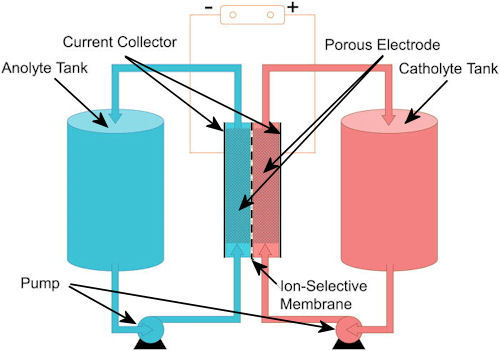 A flow battery or redox flow battery consists of two tanks of liquids which are pumped past a membrane held between two electrodes, see figure on the right. The electrochemical components are dissolved in the electrolyte and reduced or oxidized in the both tanks. Flow batteries date back to the 1930s. A presently important type is the vanadium redox battery vanadium redox battery which is commercially available as vanadium flow battery (Solibra). Discharge takes place by oxidation of vanadium(II) to vanadium(III) at the negative electrode

Redox flow batteries allow an increase of capacity by a simple increase of the volume of the cells. Nevertheless, the storage capacity of about 30 Wh/kg is quite low and comparable with the lead battery.

Batteries with an energy density above 300 Wh/kg are under development. A value of 500 Wh/kg was demonstrated for a lithium-sulfur battery and much higher values are theoretically expected. Discharge takes place by solution of lithium at the anode and reaction with sulfur at the cathode

Future developments will show, which battery type can be applied above 300 Wh/kg for electric cars or energy storage.