The most sustainable energy sources are renewable bioenergy (wood, biomass, energy crops), geothermal (deep or shallow), solar energy (photovoltaic, solar thermal), hydro and wind energy. Since much more, orders of magnitudes more, solar energy hits the earth than is required for human needs, the total potential of renewable energies seems to be almost infinite. It should be noted that, with respect to our discussion about energy here, the term "potential" is not the same as in physics (see Mechanical Energy). A better term would be "availability". Also, the terms "renewable energy" and "energy sources" do not make sense physically, since in physics the energy conservation law prohibits a source or renewal of energy; only transformations are allowed. From a physical point of view, it would be better to formulate this as "availability of sustainable energies" instead of "potential of renewable energies".

The Short-term Energy Outlook (release January 2022) of the U.S. Energy Information Administration (EIA) describes the primary energy contribution from renewable energy sources in the left figure above. The renewable energy share is about 17% of the total U.S. total utility-scale electricity generation as shown in the right figure above.

The U.S. Energy Information Administration's (EIA) annual publications Annual Energy Outlook and International Energy Outlook focus on the factors that shape the energy system over the long term for the U.S. and the world, respectively. The outlooks go now until 2050 and include the expected potentials of renewable energies. The next figures and some parts of the explanations were taken from the version 2021 of the Annual Energy Outlook.

The figure above shows additions and retirements of electricity generating capacities in GW by energy source from 2010 to 2050. Solar, wind, oil and gas will increase up to 2050. Solar shows the strongest capacity additions. 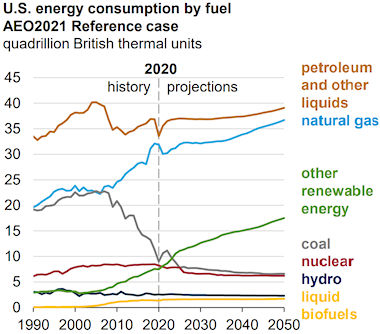 The figure at right was taken from the version 2021 of the Annual Energy Outlook. It shows primary energy use by fuel in quadrillion Btu from 1990 to 2050. The petroleum share of total energy in 2018 and 2050 does not vary drastically. Coal decreases as natural gas increases. Growing production from tight shale keeps the price of natural gas to end users below 2008 level. The renewable share of total energy use (including biofuels) increases from 9% in 2012 to 17% in 2050. On a percentage basis, renewable energy grows the fastest because capital costs fall with increased penetration and because current state and federal policies encourage its use.

In opposite, a vision for a sustainable energy strategy based on energy efficiency and 100% renewable primary and, therefore, also electrical energy was published by the German Renewable Energy Association "ForschungsVerbund Erneuerbare Energien." It claims to have the solution to achieve this and sets the share of fossil fuels and nuclear energy in energy production for 2050 at zero; see figure 2 in Energiekonzept 2050.