In electricity studies, the position-dependent vectors E, D, H, and B are used to describe the fields.

Transmission of field energy is also possible without a medium through empty space. 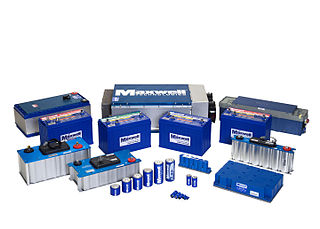 Capacitors, therefore, can be used for energy storage, for such things as bicycle lights. Supercapacitors (also known as electrochemical double-layer capacitors) are shown in the picture at the right. They can be charged or discharged within a second. For bicycles, there are examples with U = 2.3 V, C = 60 F, and a weight of 15 grams. From this data, one can calculate an energy density of about 3 Wh/kg from the equations above. The energy density of super capacitors is about an order of magnitude lower compared to batteries. However, the charging and discharging time for batteries is about 100 times slower compared to capacitors. Thus, the power density for capacitors is about an order of magnitude better (3000 W/kg for the example here).

Supercapacitor metro trains, trams and buses that provide regeneration of braking energy and the ability to operate without overhead wires are used now in China. The supercapacitor powers the vehicles for more than 2 km and the charging takes 30 seconds at each station via a fixed supply.

running through it. The magnetic field energy stored is

Energy storage in magnetic fields is expensive, making technical applications impractical. For example, large liquid helium cooled superconducting magnets for magnetic resonance imaging (MRI) or high-field nuclear magnetic resonance (NMR) spectroscopy require currents of 200 A. A self-inductance in the coil of 180 H results in a respectable magnetic field energy of about 1 kWh. However, the magnet weighs several hundred pounds and costs more than one million dollars. High-temperature superconductors provide some hope for a cheaper method of energy storage in magnetic fields in the future.

Electromagnetic fields are not just used for energy storage. Transmitters of radio stations with a power of 100 kW can distribute the transmission energy to an area 100 km in diameter. A cell phone also uses electromagnetic field energy. For a phone with a 1 Watt power rating, about 1 kJ of energy radiates from the phone per hour when in use.