Galvanic cells convert chemical energy into electric energy, as seen in batteries. Reduction and oxidation reactions run spatially separated in either of two half cells, that are connected by an electron conductor and an ion conductor to create a closed electrical circuit. A fuel cell consists of a Galvanic cell that is continuously supplied with fuel (for example, hydrogen) and an oxidant (for example, oxygen) and continually generates electricity out of chemical energy.

The first fuel cell was introduced by Christian Friedrich Schönbein and William Robert Grove in 1838/1839. This fuel cell was pictured in the text book W. Ostwald, Elektrochemie, Leipzig 1896, as Fig. 180 and is shown below. The flasks of the figure are filled with dilute sulfuric acid. The tubes covering the platinum electrodes are filled with oxygen or hydrogen before use. A current is produced, which can be used to convert the water in the upper black vessel into oxygen and hydrogen. 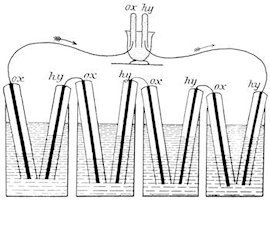 In 1877, Jules Verne formulated the future vision for fuel cells:

Water will one day be employed as fuel, that hydrogen and oxygen which constitute it, used singly or together, will furnish an inexhaustible source of heat and light, of an intensity of which coal is not capable… When the deposits of coal are exhausted we shall heat and warm ourselves with water. Water will be the coal of the future.

In 1894, Wilhelm Ostwald pointed out a substantial difference between fuel cells and the heat engines used for electricity generation:

The efficiency of the fuel cell is not limited by the Carnot efficiency.

The development of technically usable fuels for space travel and military use began in the second half of the 20th century. Meanwhile, many applications have been developed. In a single fuel cell that generates one volt, the anode and cathode are separated by an ion-conductive thin layer, and the anode and cathode are made of electron conducting materials. Larger voltages are achieved by stacking these cells. 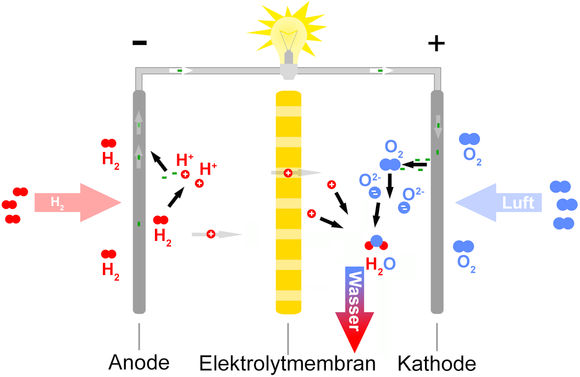 The picture above shows the schematic design for all current fuel cells, in which hydrogen and pure oxygen are used. The hydrogen can come from organic compounds such as methane or methanol, and the oxygen comes from air, which is about 20% oxygen. At the anode, the oxidation reaction (electron creation) takes place:

and at the cathode the reduction reaction (electron consumption)

The net reaction (from adding together the anode and cathode reactions) produces only water, which is an environmentally-friendly exhaust product:

Proton exchange membrane (PEM) fuel cells operate at 70 °C. For the electrolyte membrane, they use a thermoplastic polymer that conducts protons but not electrons and is gas tight. Their electrical energy production can reach 35% efficiency. An increase in the efficiency to 47% can be achieved by solid oxide fuel cells (SOFC), which operate around 900 °C. The electrolyte membranes for SOFCs are usually made of yttrium-doped zirconia and have a good conductivity for oxygen ions and are not conductive for electrons. Detailed presentations of fuel cells can be found at Wikipedia and the Fuel Cell & Hydrogen Energy Association.